Holocaust Memorial Day ceremony was held on Tuesday, 30 January 2018.  Our President Helena Divorya Lobel and her husband Leslie represented our Community at the ceremony. which was held at the Ayuntamiento of Alicante. Leslie’s report on the day is as follows :
International Day in Memory of the Victims of the Holocaust – 30 January, 2,018
The official day on which this annual event is normally held, is 27 January, but this year it was held on Tuesday, 30 January.
As usual, the Commemoration was organised by the Ayuntamiento of Alicante, in collaboration with the Comunidad Judia de Alicante Centro, and held in the Blue Room of the Ayuntamiento,
Representing the Ayuntamiento was Fernando Marcos (Councillor for Historic Memory). Also present were Armando Azubel (President of the Comunidad Judia de Alicante) and Pilar Fernández, (representing the Romany Community).
The total attendance at the event was approximately 100. This number included 14 members and non-members of the Comunidad Israelita de Alicante.
The first address was by Councillor Marcos, who said there were no words to express the horror that the Nazi regime had sowed during the Second World War, and that had led to the extermination of six million Jews, and also the persecution and murder of millions of gypsies, homosexuals, and disabled people.
In his speech, Councillor Marcos said the department of Historic Memory would continue to work to remember events, such as the one we were celebrating. He said that forgetting would be like recognising it did not happen. Councillor Marcos went on to say that the Historic Memory department would continue to work to ensure that the tragedy of the Holocaust was made known to young people and children. He said that was the reason the children of the Colegio Aire Libre had been included in today’s event.
Speeches in a similar vein were also made by Armando Azubel and Pilar Fernández.
During the commemoration, students from the José Tomás conservatory, performed several pieces of music on piano and guitar.
Towards the end of the commemoration, Mario Rodrigues Pereira, a long-standing member of our Community, was called upon to say a prayer in Hebrew.
In conclusion, six representatives from various groups were invited to light candles. The sixth candle was lit by our Community President, Helena Lobel. 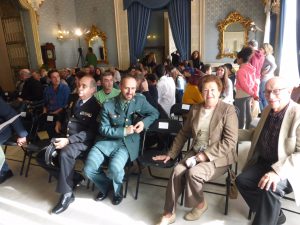 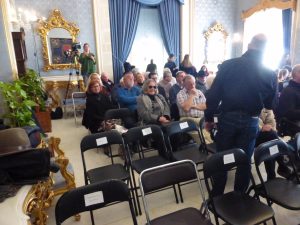 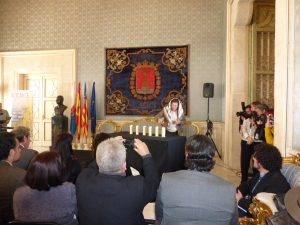