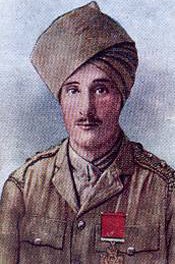 The first Jewish soldier to receive the Victoria Cross has been honoured at a ceremony in London on the 100th anniversary of his death.
On Nov. 23, 1914, Lt. Frank de Pass and three Indian Army Troopers defied bombing near Festubert in France to blow up an enemy trench. He then rescued a wounded man under heavy fire. Lt. de Pass was killed by a sniper on Nov. 24.
His great-nephew Lt. Col. Jonny Kitson, of 1st Bn. The Rifles, read the citation before a commemorative paving stone was unvelied at Victoria Embankment Gardens in Westminster.
Daily Telegraph 26.11.2014