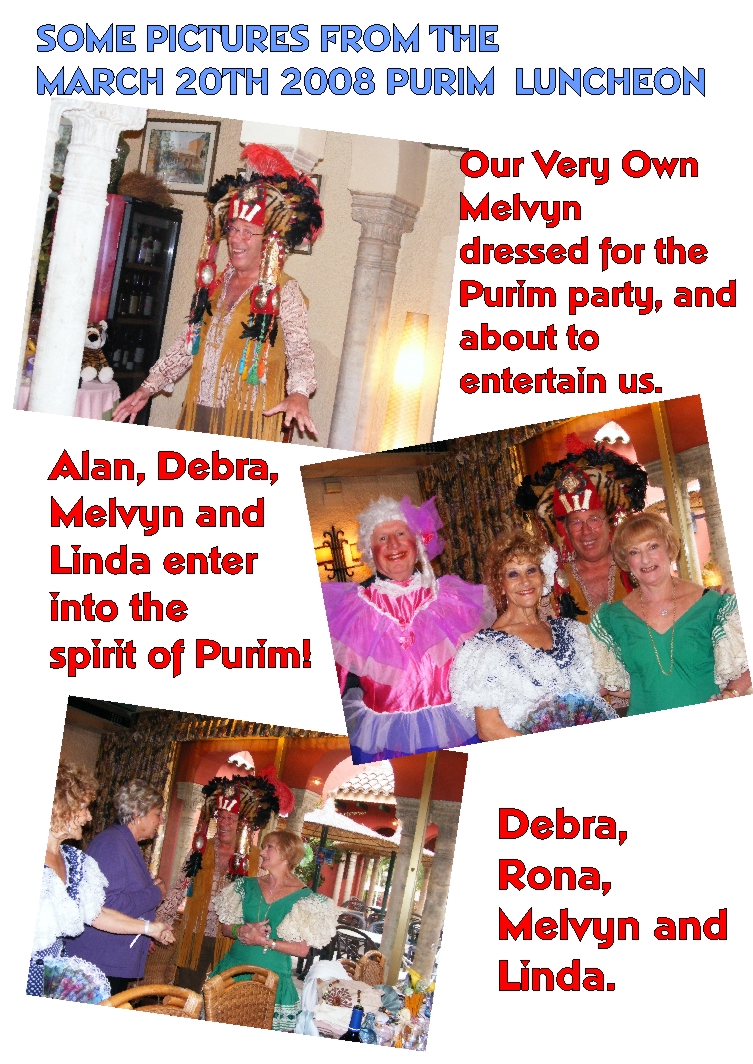 Around fifty members and guests of the Comunidad gathered on Friday December 7th at the synagogue Social Center to light the large shul menorah, together with many smaller menorahs brought along by others.Mario Periera recited the blessings and the Hanerot Halalu at the lighting of the fourth candle and everyone joined in the singing of Moaz Tzur. There followed the lighting of the Shabbat Candles, after which we all made our way into the synagogue for the Shabbat Service. This was followed by a special Kiddush Table on which was heaped all kinds of mouth watering foods, many of which were of the traditional variety such as lutkas, fried fish, and doughnuts. Hunukkah Gelt, Dreidals, and Festive Decorations abounded, and song sheets provided us with words for the Hunukkah “Sing Along”. 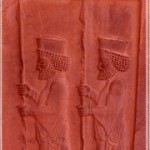 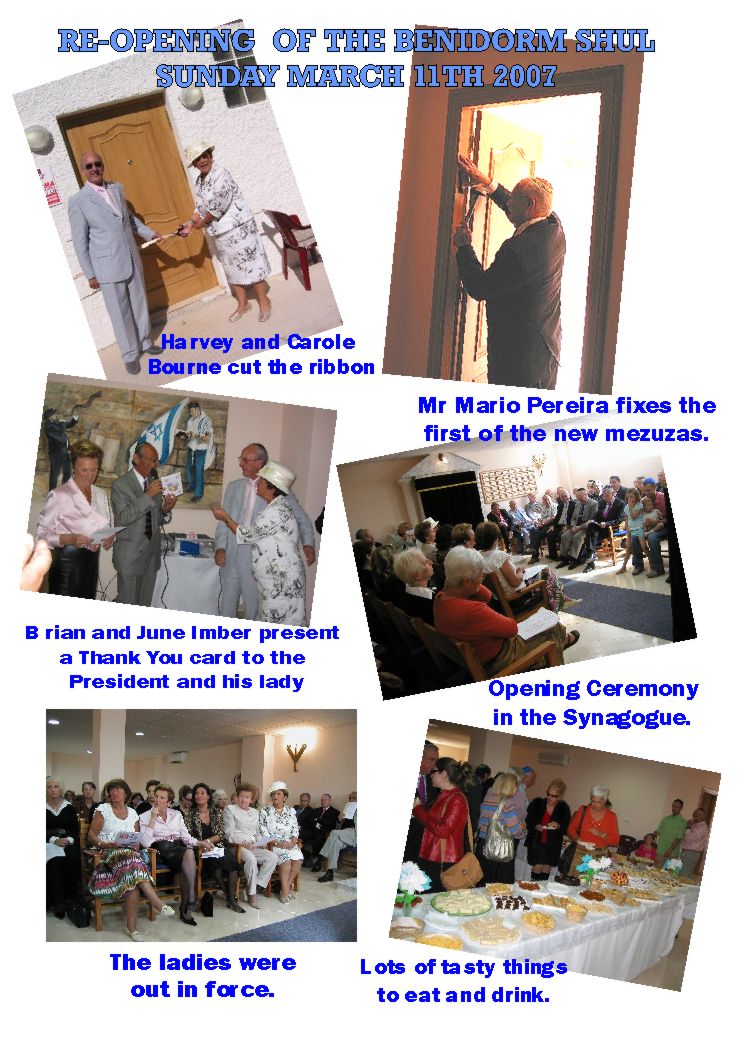 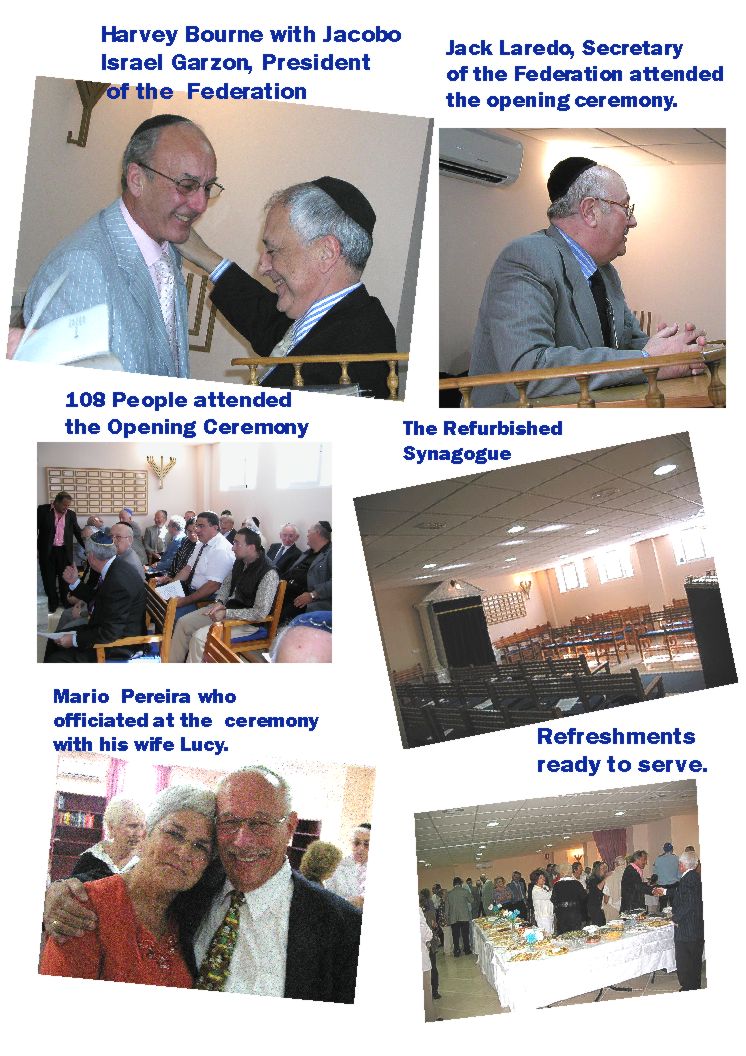 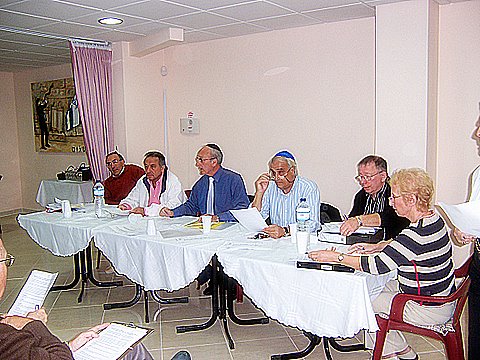 Sunday 11 March 2007
By our own correspondant: Evelyn Adams

The Comunidad Israelita de Alicante in Benidorm prayed, communed, and enjoyed. And it mattered not that the shul building was a bit small, inconvenient, no air-conditioning, and with a tiny kitchen!! Jews throughout the world, and through the aeons of time, have congregated in buildings and places far less hospitable than this. But last year, it was decreed by Committee, that the time had come, to re-build the building, to create more space, to knock down walls, build a proper kitchen, (of course), comfortable toilets, and most importantly, a bright and spacious synagogue with a fantastic function area.
It so it came to pass, that the shul area was demolished, and from the pile of bricks, dust and broken concrete, there emerged a new Synagogue and Social Centre. The toils, troubles, ups, downs, brick dust and of course, the mountainous pile of paperwork involved in a project like this, all forgotten on this sunny Sunday afternoon, as the congregants gathered to pray, praise, offer thanks and celebrate.Carol Bourne cut the ribbon, and everyone trouped inside for the Mezuza Ceremony. Ã¢â‚¬Å“And you shall write them on the doorposts of your house and on your gatesÃ¢â‚¬Â. There was a moment of panic. The hammer had disappeared. Even in this new House of Prayer, it would take a miracle to hammer four Mezuzot in the door frames without a hammer. But then it was found and Mario Pereira ceremoniously banged the first Mezuza in place. Three more more affixed by past Presidents of the Comunidad. After the Blessings for the Mezuzot, Mario welcomed Jacobo Israel Garzon, President of the Federation of Jewish Communiteis in Spain, and Jack Laredo, Secretary, who had come to join in the celebrations. Also warmly welcomed, were the Past Presidents of the Comunidad, whose contributions to the success of this congregation had been vital. A minuteÃ¢â‚¬â„¢s silence was observed in memory of those who perished in the Madrid bomb atrocities on 11 March 2004.Mario Pereira then conducted a short but moving re-dedication ceremony in the Synagogue, proudly showing off the new covers for the Ark and Bima, and the wall plaques donated in lasting memory of loved ones. He reminded the congregants, repeatedly, as if they needed reminding, of the incredible amount of hard work and effort that has gone into the refurbishment of this building, and the obvious love and dedication that has made all this possible. A mitzvah indeed.Harvey Bourne, the ComunidadÃ¢â‚¬â„¢s inspirational President, his face beaming with delight and pride at being able, at last, to stand on the Bima in this gleaming building, said an enormous and heartfelt thank you to all those who have made this possible. He praised his incredible hard working Committee and everyone else without whose unselfish contributions, this day would not have been possible. Ã¢â‚¬ËœAnd for the lady who never says no, to any request whatsoeverÃ¢â‚¬â„¢, Helena Winestone was given an extra special mention and presented with a gift in recognition of her huge contribution as Chairperson of the Re-Furbishment Committee and her unfailing cheerfulness and loyalty.Both Jacobo Israel Gaerzon and Jack Laredo, took the opportunity of extending their greetings and good wishes on behalf of all the Jewish Communities they represent, and told us that there are now 45,000 Jewish people in Spain belonging to 13 congregations dotted around the country. How wonderful it is that these Jewish congregations are now thriving in this country where once, they were persecuted and expelled.The congregation sang Adon Olam and Hatikva and adjourned into the new Communal Hall for tea Ã¢â‚¬â€œ tea, schmee!! On the groaning tables was a wonderful array of sandwiches, open and closed, cakes, biscuits and of course, slices of Carol BourneÃ¢â‚¬â„¢s Best Cheesecake in the world. Brian Imber, Chairman of the Social and Cultural Committee, reminded everyone of the ComunidadÃ¢â‚¬â„¢s Ã¢â‚¬ËœForthcoming AttractionsÃ¢â‚¬â„¢ and that this new Hall is to be used and enjoyed by the Community and all suggestions for Ã¢â‚¬Ëœfuture functionsÃ¢â‚¬â„¢ will be happily received.Brian then presented tearful Harvey and a smiling Carol with a special card from the Community. A card large enough, he told them, to have the signatures of all the members and friends of the Synagogue would have been too big for even the new wide Synagogue doors, and so although not full of signatures it was filled with love and thanks by everyone who touched it. Without Harvey’s leadership, vision, and incredible hard work, the old building would probably still be standing.PS:
A member of the Congregation was overheard asking Mario if there was a suitable blessing for Watford Football Club, playing later on in the quarter finals of the FA Cup. Looking straight at the President, whose Yarmulka proudly displays an Arsenal badge, Mario replied that he didnÃ¢â‚¬â„¢t think there was a prayer for that team either, but he would do his best. Something good must have come of mentioning WFC during this happy and holy event, they won 1-0 and are now in the semi finals!! 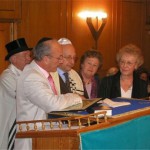 On February 12th 2006, the Communidad Israelita de Alicante, (The Benidorm Synagogue) recieved with great joy and rejoicing a Sefer Torah from London, England. It was given on permanent loan from the Holland park Spanish & Portuguese Synagogue, London. It is believed to be about 100 years old and originally from Spain, and so felt very much like the homecoming of a very dear friend.

It was most carefully transported by Mr & Mrs Childs of London, and recieved on behalf of the Community by the President, Mr Harvey Bourne. After a very emotional and moving ceremony, conducted by Mr Mario Pereira, in a full to capacity Synagogue, the Sefer Torah was placed in the Ark.

A celebration party was then held in the premises next door, which the Community has just purchased, and which will, after refurbishments plans are fullfilled, become the focal point for future social activities.

Shows left to right: Mario Pereira, (officiating), Harvey Bourne, (President), Irving Childs, (who transported the Sefer Torah from England), Mrs Helena Winestone, (committe member), and Mrs Joya Childs.
This picture shows the presentation to Mr & Mrs Childs of a certificate from the JNF recording the planting of trees in their name in Israel by our Community as a token of apreciation for the important part they played in the acquisition of the Sefer Torah. 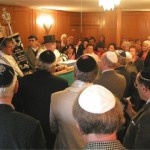