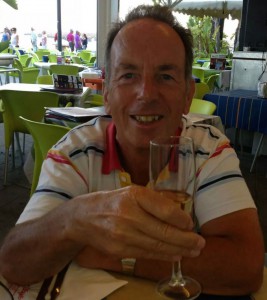 “Some enchanted evening”… and so it was. I looked across a crowded room and saw a young man with blue, blue eyes (as blue as the sky, says my daughter) staring back at me. He took me home that night, stayed until 3am talking and talking and I wrote in my diary: “have met the man I’m going to marry”. Having recently walked away from a tempestuous relationship I had made up my mind never to marry but from the start, Leslie was always steady and reliable, always there for me…..

We married in 1973 and our adored daughter was born in 1977. Leslie was an amazing father, always hands-on and always available to change any nappies I found too messy to deal with! That is, when he was at home, as he was steadily moving through the ranks in his job with Post Office Catering. He left school at 15 with no qualifications but took himself off to night school and was rightly proud of his achievements. He worked long and hard but always had time for his family and friends. We entertained frequently and he was a huge help to me (of course!) in the kitchen. He was sociable, friendly and always had a dry sense of humour and a witty quip. Our life was full and happy. Unfortunately, due to the recession, Leslie lost his job as Area Catering Manager in the Post Office but set up his own finance company.

We came to Spain eight years ago, as it was always Leslie’s dream to live in the sun and he was happy to take early retirement. Initially, life was good. We joined the shul, made good friends, attended Spanish classes, joined the U3A ….but slowly Leslie was changing. He started complaining of terrible back pain, had one back operation and then a year or so later a further one. Neither was successful and he was on many pain-killers. I saw the tall, strong, sociable, confident man I had married change before my eyes, both physically and mentally, but he still tried so hard to be the man he once was. Two years ago he was diagnosed with Parkinsons disease but with hindsight I think it was taking over his mind and body incipiently for quite some years before diagnosis. Year by year, his quality of life was diminishing and we were unable to fulfil so many of our dreams – to travel, explore the wonderful cities of Spain and Europe, etc. However, our friends stayed consistent and were wonderful to us. In April of this year Leslie had a major back operation which initially was declared a success but an infection set in and so he had a further operation in May, after which he was hospitalised again with diverticulitis. The last three months of his life were filled with pain and adversity and I had already started mourning his loss. Our daughter came to see him just a few days before he died and as she left he called her back “for one last kiss”.

He was a lovely man, my best friend, rock and support for over 40 years. He hated pretentiousness, was always down-to-earth and he was a loyal friend. His word was his bond. I have lost a loving and deeply-loved husband and our daughter has lost a wonderful father.

I thank everyone for all their kindness and support in this difficult time.